Come and see this new work: 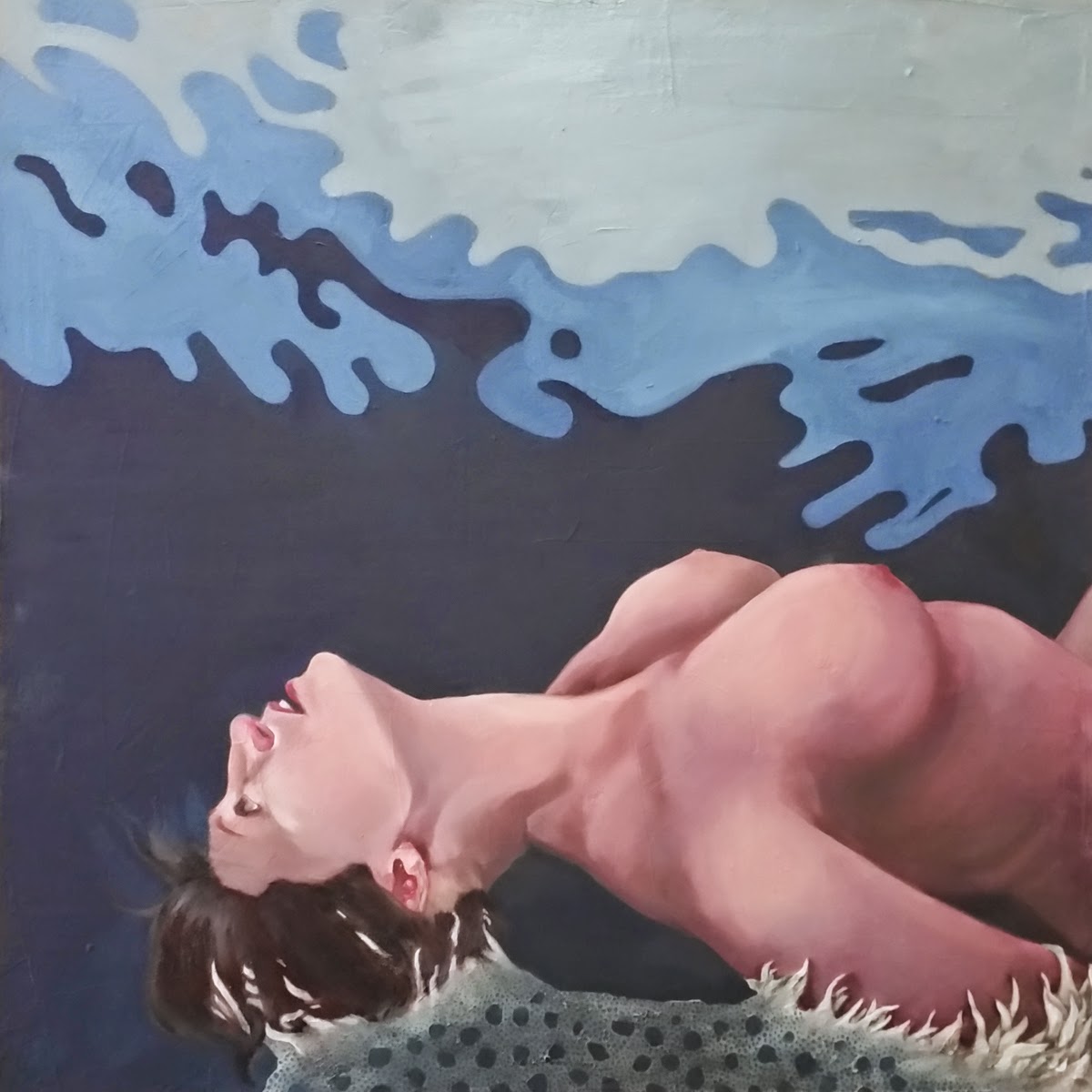 I don't even have a working title for this series yet, so there's no label for this lady.  But (I think) she's done (for now).

Posted by stephanie says at 5:32 PM No comments: Links to this post

I'll tell you what I like about music.  The way it slaps you in the face, kindly.  The way it inspires, gently.  The way it literally moves my hand in the right rhythm.  I can't paint without a soundtrack.  Really, to be honest, I don't like to do anything without music.  Regardless of genre (except country, never country), music enhances the experience.  The soundtrack I choose is always intentional and is generally an album at a time.  Tonight, I started with Alabama Shakes which alphabetically led to Alela Diane.  Beautiful.  Appropriate and driving yet calming.  And then this lyric slapped me in the face, gently : "I won't drag my feet in whatever dirt you track in."

This series that I'm working on is incredibly personal.  Dealing, mostly, with internal struggle, and touching on ambiguous outward pressures.  As the only internal struggle that I'm intimate with is my own, this work is becoming incredibly personal.  It's lyrics like this that then push me to paint -- to overcome.  Turning those experiences that challenge, that hurt, into a positive element.

So here's an in progress shot of a piece in this series...in which the figure is fighting.  Exhausted.  Pained.  Yet, fighting.  Not letting the dirt be dragged in. 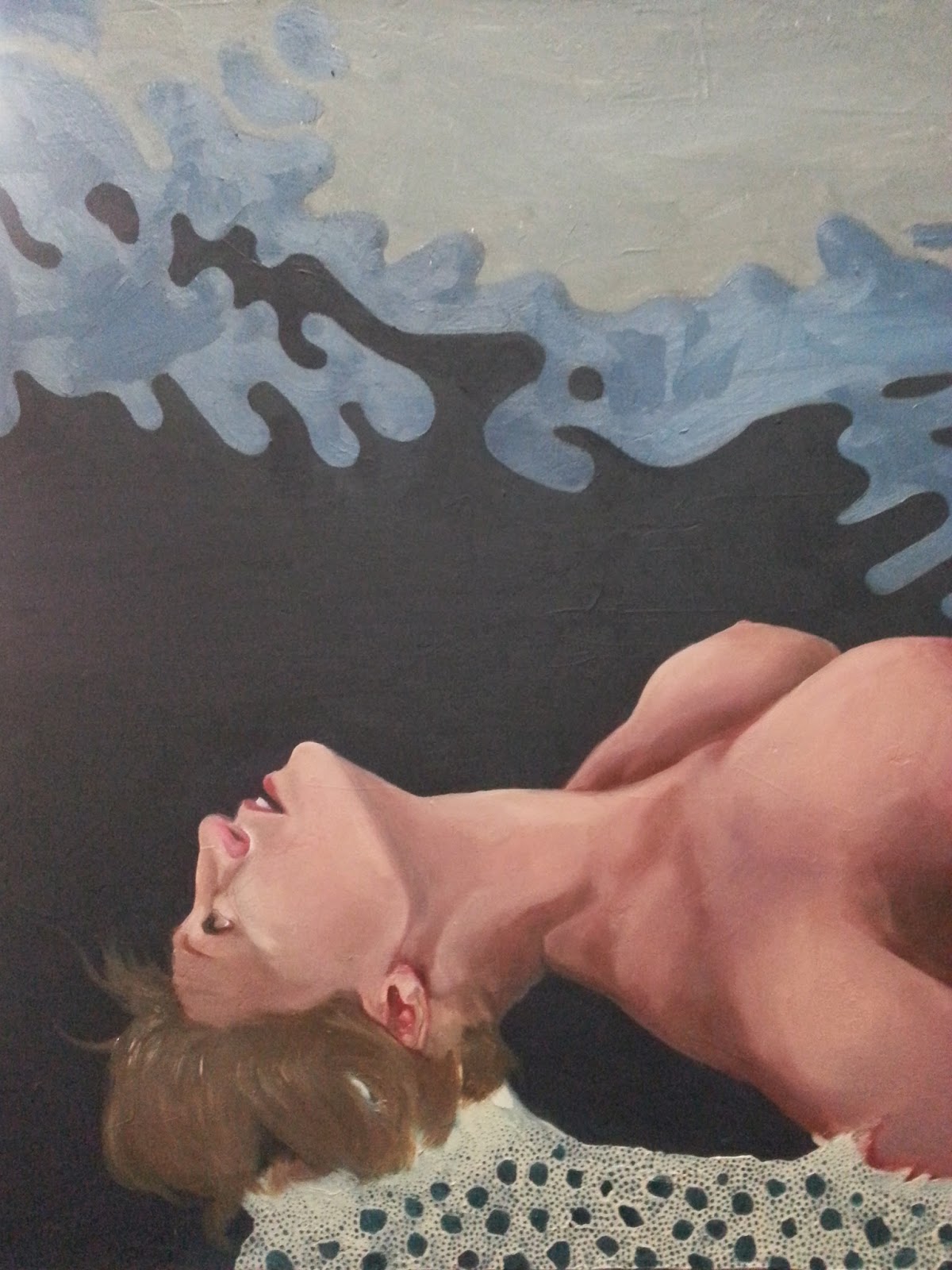 Side note : I love painting ears.  For some reason, this has always been the easiest body part to render, simply.  A line of red.  A glob of lighter flesh.  Boom - eartime.  I have local painter Luke Hillestad to thank for that.  I once noticed an ear in his painting (actually a show at the building I have my studio in now) and it blew my freaking mind on how simple the gestures were but how real it looked.  A few strokes becomes a piece of flesh.  Magic. 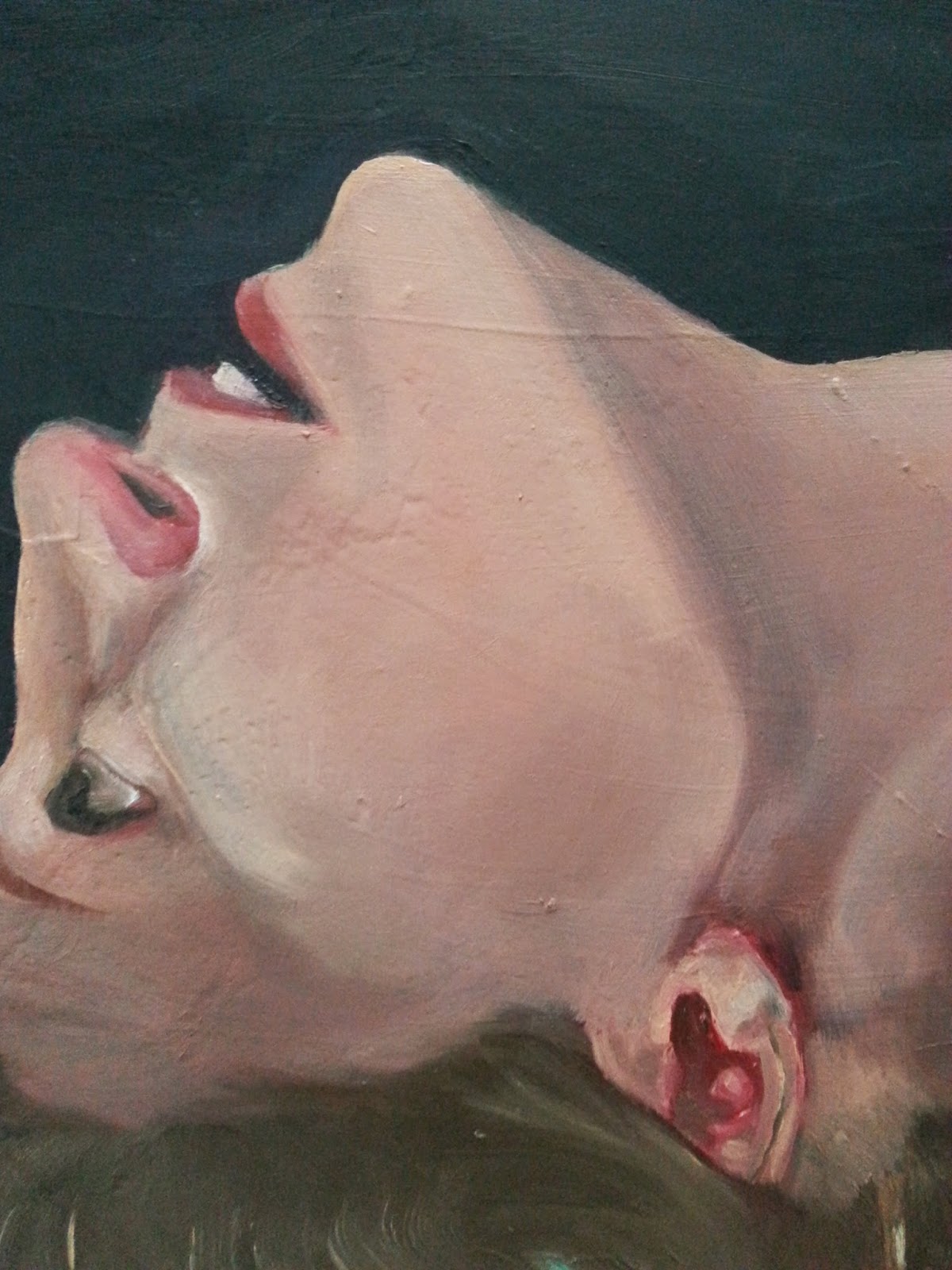 Posted by stephanie says at 9:08 PM No comments: Links to this post

Show Me Your Feet


I experienced a spiritual healing not long ago.  It was an interesting and beneficial experience.  One thing that really stood out to me was the importance to be, feel, and remain physically grounded.  When exploring the figure and how it relates to the subject matter that I'm focusing on, grounding interested me.  The lichen just may be the grounding agent in this case.  There's no physical ground seen, but gravity and weight can be seen/felt in the feet/legs.  The binding, invasive lichen are anchoring this figure to the invisible ground, which, conceptually, represents acceptance.  This being is unable/unwilling/reluctant to fight the grounding.  Positive or negative?  Not sure.

Side note : this may be the happiest I've been with a painting in a long time.  I actually think that I've (finally) married my two favorite painting styles, successfully.  This is a personal breakthrough; feeling prideful of a piece is a new, strange, wonderful feeling.  Feeling validated.  Feeling good.

Embarrassed.  Just, embarrassed.  14 months since my last post, my website has been down for quite a while and, as facebook just reminded me, I have the same amount of hours in a day as Beyoncé.  Yes, I have a day job, make my own meals and do my own laundry, so it's not a direct comparison.  But, still.  While so much of me wants to be sitting on the couch, bingeing on Orphan Black and drinking a nice Cab ... I promise to you, oh blog, my blog, to produce.

So where to start?  Months (and I mean months) ago I had a very vivid dream.  This, in itself isn't rare, but the fact that I remembered it with such detail was special.  I was in London, not the real London, but a strange London/Minneapolis hybrid, complete with skyways and food courts.  I was with a group of friends and a dangerous situation came up, so we were ushered into an unfamiliar skyway/tunnel to get back to a safe part of town.  There were crowds and panic.  We inched our way through a narrow Chinese restaurant and ended up in this skyway that had a giant aquarium as the walls (much like big aquatic tanks at the zoo).  In my dream brain I said "Oh!  This is that new Camille Claudel exhibit I've been looking for!"  Inside of the tank were nude women.  Floating.  Animated.  Pallid.  Alive, but not quite.  The figures were in different states of disrepair; some completely bronzed, some still fleshy.  There were zookeepers of sorts there to monitor these "people."  One figure, hands pressed against the glass, was no-doubt put there to make the viewer become very uncomfortable.  Or was she legitimately trying to escape?

Of course it wasn't Camille Claudel's work.  The fact that she's been dead for years could've told my dream brain that.  But I had a similar emotional response to it.  This art installation that my subconscious self invented affected me greatly, which told me that it couldn't  be ignored.  Here is where I found my new body of work, underwater.

Dealing, personally, with anxiety and depression, I can easily understand the panic in the woman's eyes as she pressed against the glass.  I can also understand the resignation in the seated or pacing figures.  I have decided to take the metaphor of a person in a tank and examine the natural barriers and prisons we find ourselves in.  As I am a woman, living in Minneapolis in 2014, this is the perspective.

You'll see a lot more of me over the coming months + years.  Promise.
Posted by stephanie says at 1:27 PM No comments: Links to this post

Living is easy with eyes closed...